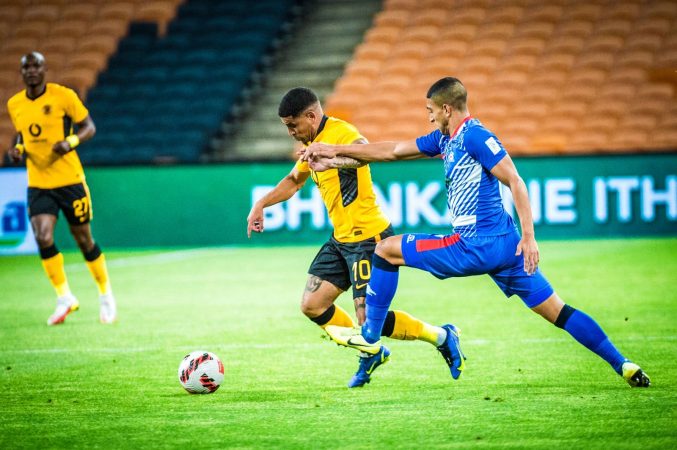 Keagan Dolly is urging his Amakhosi teammates to focus on one game at a time and not to feel the pressure of enhancing their log position, as they prepare to face Chippa United away in the DStv Premiership.

“There’s no easy game. Chippa are going to want to fight. After we beat them 4-1 at home, they are going to want to prove to us that they’re stronger than that. For us, we need to focus on ourselves, especially after our last game in which we lost to Golden Arrows at home. We need to pick ourselves up and start winning every game we can. Let’s start with Chippa and stick to the game plan and execute all the plans we have for that game,” Dolly told www.kaizerchiefs.com ahead of the game.

He felt the team let the pressure of focusing on the uncertainty of their outstanding games get the better of them ahead of the Arrows game.

“I feel like we focused a bit too much on our outstanding games. That’s why we felt all the pressure against Golden Arrows. We felt it was a must win and we weren’t relaxed. I feel like we should not focus on where we want to be and where we are on the log, we should focus on the game at hand and once we do that we will reach where we want to be at the end of the season. We just need to focus on our individual goals and the goals as a club, to try and grow as players and help the team succeed and win games. If the team plays well, if we create chances Keagan Dolly plays well. In the past few games, I haven’t been scoring, we haven’t been creating chances. It’s the whole team, if everyone does well and plays their part on the field, we will be good,” says Dolly.

The Chiefs attacking midfielder is looking forward to the imminent return of fans back to the stadiums.

“Obviously I was excited about fans returning to stadiums. Especially at Kaizer Chiefs the supporters play a big role in terms of us getting the confidence and motivation from them, so I think with them coming back to the stadiums it is a little more pressure on us to perform week in and week out, knowing our people are coming to watch us. It’s exciting times for us, it’s going to be my first time playing in front of our supporters and I’m looking forward to it,” says Dolly.

He enjoyed his return to France with Bafana Bafana, difficult as it was on the pitch for the team.

“Overall it was a good trip, despite the result. For most of the players, it was their first time in Europe, their first time in France and coming up against opponents like that is something they can learn from. It’s memories that will last forever. Against Guinea we played well. We created lots of chances, but unfortunately couldn’t convert those chances, but there were lots of positives. Then playing the world champions is always tough. Playing against players like (Kylian) Mbappe, can win you a game. We always knew it wasn’t going to be easy, but there’s a lot we can learn from. It shows we still have a long way to go, we have a lot to work on. But the more we play those types of games, the more we get to experience and the better we get,” says Dolly of a trip that was a return to his football home for four and a half years.