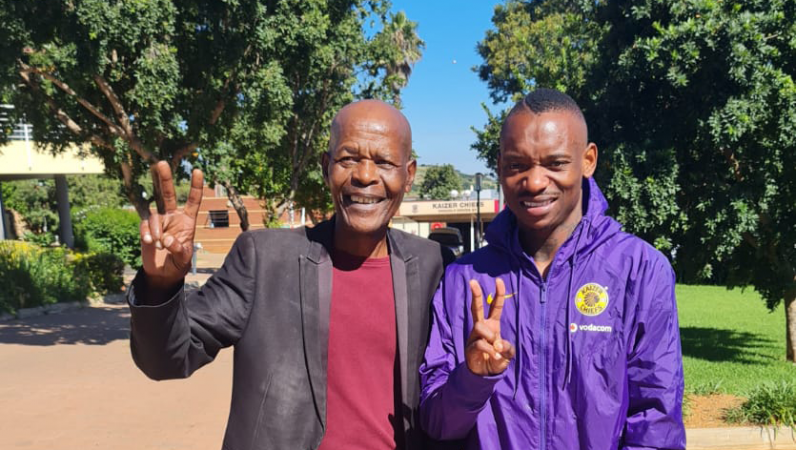 He still has the boyish, naughty, mischievous smile – and the starry twinkle in his eye – that led to him earning the famous nickname ‘Teenage’.

It’s his playful, almost disarming look, and scrawny figure, that surely lulled defenders into a false sense of security, before they realised too late that it masked a lethal, clinical footballing style that ripped opponents apart.

When the topic comes up about who the best players were to ever wear a Kaizer Chiefs jersey, the name of Nelson ‘Teenage’ Dladla is one of the first to spring to mind.

The Chiefs legend recently returned to Naturena and donned an Amakhosi jersey for the first time in years, as he was part of a special group of Chiefs legends that visited the Sharpeville home of Simon ‘Bull’ Lehoko at the invitation of the Club’s Sedibeng region of supporters.

‘Teenage’ was a special player, one of those football artists and entertainers who with the number ‘11’ jersey on his back helped build the brand of Kaizer Chiefs into the global juggernaut it is today.

When Chiefs’ charismatic former Chilean coach, Mario ‘The Godfather’ Tuani, arrived at Amakhosi in 1979, he told Dladla: “When you were born, God put you in the front of the queue for footballers. I can’t coach you. You know what to do”.

And indeed, it was virtually impossible to ‘coach’ Teenage, his talents were God-given, pure natural ability and instinct.

For any Amakhosi coach, the team talk was simply ‘get the ball to Teenage and play it to his feet, he will take care of the rest’.

And take his opponents on Dladla certainly did – to deadly effect, as Chiefs’ creative, attacking dynamo that created dozens and dozens of goals, and scored them by the bucketload too.

“Besides his phenomenal athletic ability, Teenage had an incredible turn of speed and change of direction. Defenders gave him space, but once he ran at them, he was lethal, there was no stopping him,” Dladla’s former Chiefs teammate and good friend Jan ‘Malombo’ Lechaba said as he described his qualities.

When asked to describe himself as a footballer, a chuckling Dladla says to www.kaizerchiefs.com that he was “a genius, a marvel to watch”.

“People tell me ‘when I look at you, you used to entertain us, we so loved you. The game you played in your era; you were our Messi’. When I look at videos of me playing ‘eish, it’s trouble all the way’. People are just falling over at my feet,” Dladla laughs, his eyes lighting up, as he goes down memory lane and delights in showing a clip of him in his element in a Soweto Derby in its heyday at the Orlando Stadium.

It meant a great deal to him that Chiefs supporters, despite their economic hardships, would travel the length and breadth of the country to watch the team, sleeping on buses and travelling from town to town to do so.

And he knew the only way to repay them was to entertain them with Amakhosi’s brand of exciting, winning football.

Dladla’s hat-trick against Durban City in 1979 secured Chiefs’ third league title, and first in the multi-racial era, and was one of his defining moments as a footballer.

And Dladla was devastating for Chiefs in the 1980s, a sensational era in which Amakhosi won 29 trophies between 1980 and 1989.

Prolific Amakhosi striker Johannes ‘Big Boy’ Kholoane said of Teenage “short as he was, he was very intelligent and very skillful. The message he always got from the coach was ‘take them on’.”

Chiefs coach Eddie Lewis wasn’t initially a fan of Teenage’s “mickey mouse football”, but he soon came around when he saw just how effective Teenage was on the pitch.

The likes of Tuani and Joe Frickleton were far more amenable of Teenage and conscious of his huge contribution to the team’s success, with Frickleton saying of the Amakhosi superstars like Teenage at his disposal that ‘even my grandfather, my grandmother even, could coach this team. You guys are too good’.