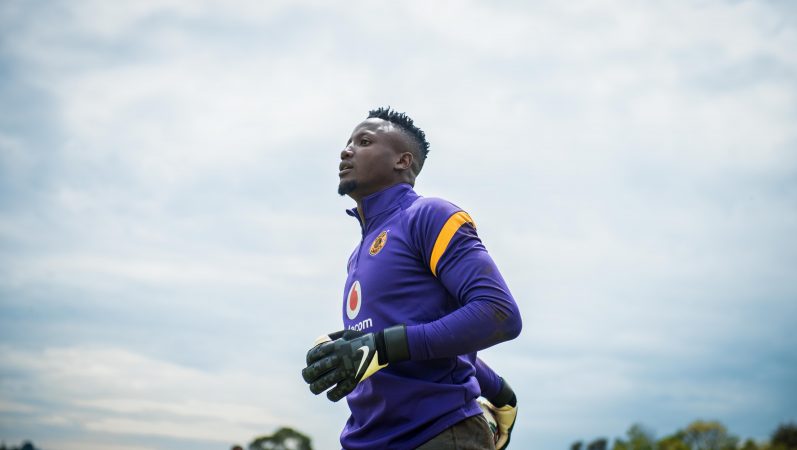 Kaizer Chiefs goalkeeper Bruce Bvuma has a busy fortnight ahead of him.

First up, he is busy readying himself for Chiefs’ next league assignment against Golden Arrows in the DStv Premiership on 19 March. Thereafter, he will be packing his bags and heading off to Belgium and France as part of the South African national team, as they get ready to face Guinea on March 25th and world champions France in Lille four days later in friendly internationals.

Of his call up to the Bafana Bafana squad by coach Hugo Broos, he was appreciative of the opportunity to again be part of the national team set up.

“It makes me feel happy. At the same time I need to work hard because of the opportunity given to me. For me being called up to the national team is an achievement I can never stop being excited about,” says Bvuma.

While he may not be playing regularly for Chiefs, there is no doubting his quality and his value to the Bafana Bafana set up.

“Every player wants to play for the national team, especially in my case as I have not been playing. Here I am in the national team. It is all by the grace of God. I get the favour from God and not anyone else,” Bvuma says gracefully.

He is ready to make the most of his call up.

“I have to keep on working hard so I perform when I am given the chance.”

With Bvuma currently part of a quartet of goalkeepers fighting for the number one jersey at Chiefs, he understands the challenge he faces to be Amakhosi number one.

“Kaizer Chiefs is known for producing the best keepers and me being part of Kaizer Chiefs  goalkeepers means a lot. We have four international goalkeepers right now, competing each and every week, and it feels great to be part of this group,” says Bvuma.

While he has a lot to be excited about in the days ahead, Bvuma is focused on domestic matters at hand.

While Chiefs have an outside shot at the title, he is very cautious of being over optimistic.

“At the moment we are taking it one game at a time, as we know we have quite a few games to play. It will be the little things we need to apply ourselves correctly to against Arrows and take the points. The coach has explained to us how they play and we have prepared well for the game,” says Bvuma.

His objective and target could not be clearer for the rest of the season.

“We just want to win every game. We are not looking at who’s up and whose down or whose behind us. That’s all we are doing right now, taking each game as it comes