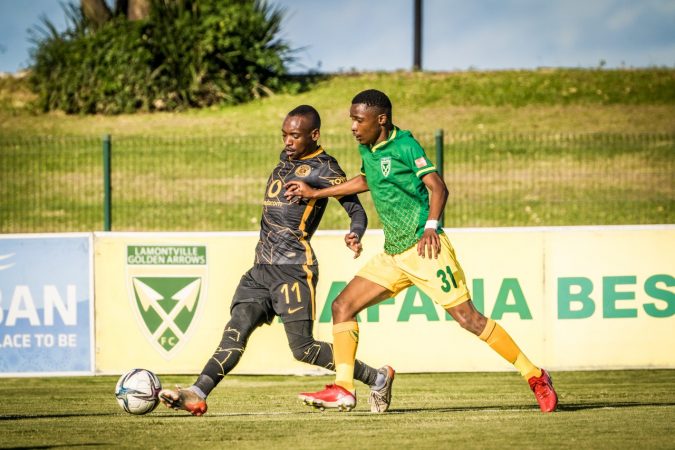 Once again, Chiefs dominated large parts of the encounter, but bemoaned second half defensive lapses which saw Arrows come from behind to seal a 2-1 win.

Khama Billiat was again Chiefs’ main focal point in attack, shooting just wide when getting a sight on goal in the 12th minute.

Chiefs early pressure resulted in the game’s first goal just past the quarter hour mark of the first half, with Leonardo Castro’s delightful dinked ball finding Billiat, whose clinical finish this time gave Arrows keeper Sifiso Mlungwana no chance to give Chiefs an early lead.

Amakhosi were all over the home side, who struggled to gain a foothold on the game at all in the first half.

Arrows did manage a shot on goal on the half hour mark, but midfielder Saziso Magawana’s shot was comfortably saved by Chiefs custodian Brandon Petersen.

Soon after there was a nervy moment for the home side as Castro’s presence unsettled Mlungwana, who spilt the ball, but the referee ruled that the Arrows keeper had been impeded.

So dominant were Chiefs that they forced the home side into making a tactical change 11 minutes before the break as Sbonelo Cele made way for Siboniso Conco.

But Chiefs dominance continued as Amakhosi’s defence marshalled the game well and ensured shot-stopper Brandon Petersen was largely untested in the opening 45 minutes.

While Chiefs enjoyed much of the possession in the first half, they were not as incisive as they would have liked and failed to create more clear cut chances to extend their lead.

Five minutes after the break the Keagan Dolly-Billiat combination unlocked Arrows defence, as it has done to many opponents this season, with Dolly’s delightful through pass finding Billiat, whose shot went inches wide.

In the 56th minute more Chiefs pressure saw Billiat fouled on the edge of the box, with Dolly’s resultant free kick hitting the defensive wall and spilling away for a corner.

Coach Arthur Zwane made a double change in the 58th minute, bringing in Kearyn Baccus for skipper on the day Ramahlwe Mphahlele and Dumsani Zuma for Nkosingiphile Ngcobo, as Chiefs went in search of more goals.

It was one-way traffic for Chiefs, but the game would be turned on its head on the hour mark, when an error in defence by Njabulo Ngcobo was punished by Conco, who capitalised and was quick to pounce to net Arrows equaliser.

Zwane threw on Samir Nurkovic for Castro and replaced Ngcobo with Daniel Cardoso in the 72nd minute, as Chiefs went in search of salvaging a game they had largely dominated.

The Amakhosi faithful in KwaZulu Natal were in full voice and raised their voices to help lift the team.

Those fans at the stadium and the many watching at home were left bitterly disappointed as the visitors snatched the lead against the run of play in the game’s 87th minute.

An Arrows set piece from the right was met at the near post by Michael Gumede, whose sharp header beat Petersen and stunned the crowd into hushed silence.

It would prove to be the game’s winner, as Chiefs slipped to a third successive DStv Premiership league defeat.

Chiefs remain rooted on 39 points from 25 matches played now, as they again lost ground in the race for CAF qualification places.

MVP: Khama Billiat was once again Chiefs’ most threatening player, scoring the game’s opening goal and coming close on a few more occasions.

What’s next: Chiefs next host Cape Town City on Saturday at the FNB Stadium in the DStv Premiership, with kick off at 15h00.