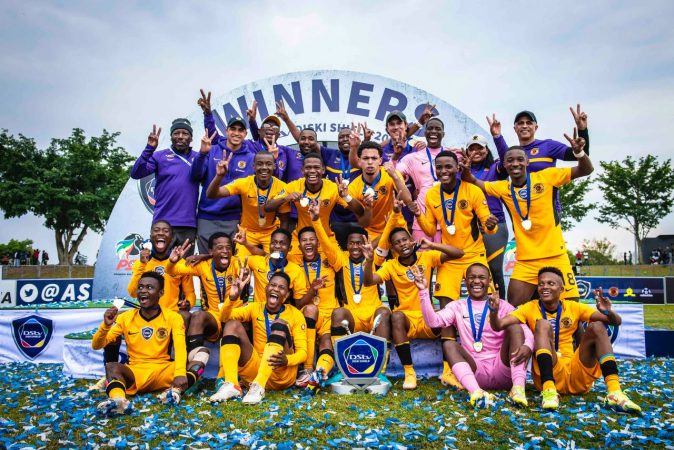 Kaizer Chiefs Reserves were crowned Champions of the 2022 DStv Diski Shield after a convincing 2-0 win over Stellebosch FC Reserves on Saturday afternoon at Mpumalanga Stadium in Hammarsdale, KwaZulu-Natal.

The young Amakhosi fought like warriors to overcome the vastly more experienced DDC league champions whose ranks contain a number of players with PSL experience.

It was chiefly due to the exploits of 16-year-old Mfundo ‘Obrigado’ Vilakazi and his 18-year-old captain Mduduzi ‘Do like I do’ Shabalala that the DStv Diski Shield trophy will reside in the Naturena trophy cabinet for the forthcoming year. In the 59th minute, Vilakazi received a sublime pass from Shabalala, took a neat touch and sent a spectacular left-footed shot into the Stellenbosch net. Shabalala made the game safe six minutes from full time, tapping in the rebound after second-half substitute Puso Dithejane’s effort struck the post.

The Diski Shield trophy becomes the second trophy won by coach Vela Khumalo and his exciting Amakhosi youngsters in quick succession following their victory in the Engen under-18 Knockout Challenge earlier in July.

Amakhosi’s road to the final saw them beat SuperSport United 4-2 in the quarterfinals and Sundowns 2-0 last weekend in the semifinals held in Soshanguve.

Coach Khumalo was a delighted man at the end of the match: “It was a good game and I’m happy that the trophy is back at the Chiefs Village,” he said. “We tried our best and I’m sure everyone can see that we are cooking something that will be a delight to watch in the future.”

The trophy returns to the Club after an absence of four years. Amakhosi won the inaugural Diski Shield after beating Sundowns Reserves at Makhulong Stadium in Tembisa back in 2018.

“The boys gave a good performance. We scored two great goals but, most importantly, we did not concede a goal… same as last week against Sundowns. We have been working on our defence and it has paid off. I’m glad with two clean sheets in consecutive matches,” he added.

With the schools reopening earlier this week, Khumalo decried the fact that most of his boys were back in class and this affected their preparation.

“We did it for Dr Kaizer Motaung, who received his honorary doctorate on Friday from UCT and we hope these performances will rub off on the senior team so our supporters can have something to smile about this coming season,” Khumalo added.

Commenting on the throngs of fans who filled up the Mpumalanga Stadium in Hammarsdale, Khumalo concluded by saying: “It was a great crowd and we are glad they didn’t leave disappointed. We need to dish out exciting football, played with flair and style. Then we will dominate the league. This will certainly bring supporters back to the stadium.”

Naturena Primary School will receive the R200 000 winners’ cheque after being nominated as Amakhosi’s beneficiary, in accordance with the competition rule that requires the winnings to be donated to charity.