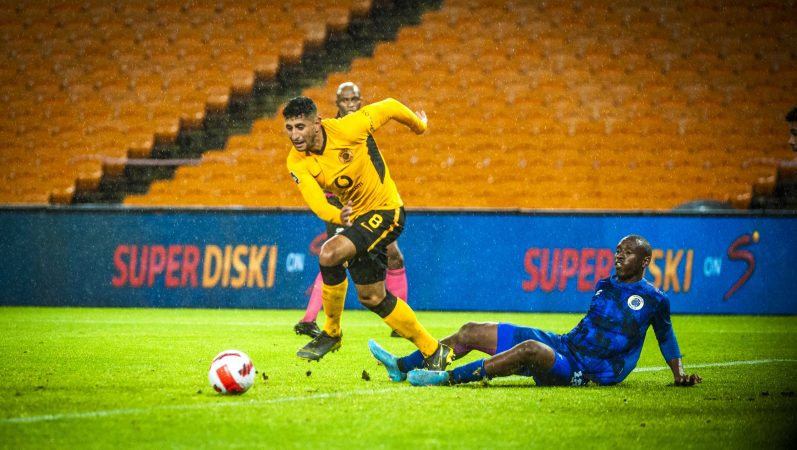 Amakhosi’s supporters braved the elements and came singing in the rain to FNB Stadium, but it was unfortunately not a happy homecoming to the stadium as Chiefs fell to a narrow 1-0 defeat to SuperSport United.

As has so often been the case, Amakhosi totally dominated the match, enjoying the lion’s share of possession and completing double the number of passes as their opponents in the game.

But again, as on numerous occasions this season, they failed to convert that dominance into goals, and they were caught by a second half sucker punch by Thamsanqa Gabuza, as Matsatsantsa headed back up the N1 to the capital with all three points.

Chiefs started positively and in the fifth minute Siyabonga Ngezana timed a beautiful late run into the box to get onto the end of a Khama Billiat corner, glancing his header inches wide of Ronwen Williams’ far post.

In the 19th minute Reeve Frosler’s cross was cleverly flicked on by Bernard Parker into the path of Samir Nurković at the far post, but the striker had strayed just offside when in a dangerous position.

In the 29th minute Nkosingiphile Ngcobo showed his vision and range of passing when slipping through Billiat with a delightful pass, but the Zimbabwean international had also strayed just offside as the linesman’s flag halted a promising move.

In the game’s 35th minute a name very familiar to Amakhosi, left back Onismor Bhasera, tested Brandon Petersen with SuperSport’s first shot on target after a good run down the left, but the Chiefs keeper saved Bhasera’s effort comfortably.

Phatutshedzo Nange and Cole Alexander marshalled the midfield well in the first half, as SuperSport struggled to make any inroads in the game.

In the 39th minute Chiefs should have scored when Frosler’s fantastic long range ball was sumptuously controlled on the run by Billiat, who jinked first past Thalente Mbatha and then Luke Fleurs,  but he just could not dink his shot over Williams, who stood firm and made a brave save.

The rebound, though, fell invitingly to Ngcobo, who could not control his shot, ballooning his effort over the crossbar with the goal gaping.

On the stroke of halftime Nurkovic had the ball in the back of the net, with Ngcobo again central to a move which ended with Parker crossing it from the right for the Serb, who finished in a flash, but was rightly adjudged just offside.

In the 45th minute Chiefs had a let off when Thamsanqa Gabuza was played through delightfully by Ghampani Lungu, his looping pass over the Chiefs defence finding Gabuza, who held off the attentions of Ngezana and when with just Petersen to beat smashed his shot well over the crossbar.

Chiefs continued their dominance in the second half and in the 57th minute Billiat sent through a peach of a cross for Cole Alexander, who had made a great run into the SuperSport box, but just could not get his technique right on the header, nodding it wide to spurn a really good chance for Chiefs.

Alexander turned provider on the hour mark, whipping in a cross for Bernard Parker at the far post after a good Chiefs move, but Parker’s shot was again thwarted by Bafana keeper Williams.

In the 68th minute, it was the visitors who took the lead, as Lungu got the better of Ngezana down the right flank, whipping his cross in for an unmarked Gabuza at the far post, who finished past Petersen to give SuperSport the lead against the run of play.

Less than five minutes later, SuperSport nearly doubled their lead, Gabuza this time turning provider for Lungu, who was thwarted by a last ditch clearance by Ngezana.

Chiefs threw everything at SuperSport in search of the equaliser, now having to play catch up in a game in which they had been so dominant throughout.

Deep in injury time Billiat again fashioned a late chance for a Chiefs equaliser, his cross not being able to be turned in by first Nange and then Leonardo Castro, as the seconds slipped away for Chiefs.

The loss sees Chiefs lose important ground in the CAF Champions League race, as they stay on 39 points after 23 games.