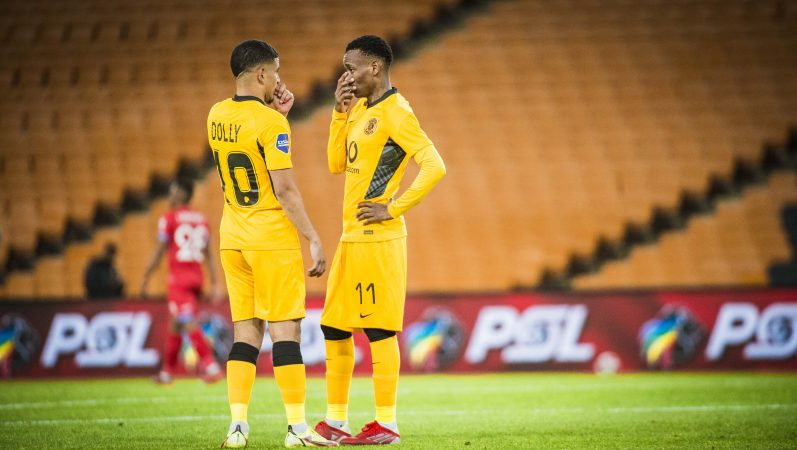 Kaizer Chiefs completed a league double over Chippa United with a 3-1 win at the Nelson Mandela Bay Stadium in a DStv Premiership game on Saturday evening.

A frantic game played at a fast pace saw Chiefs go ahead in the 23rd minute through Samir Nurković, who scored his first goal of the season.

The hosts levelled in the first minute of the second half through Bienvenu Eva Nga,

Chiefs’ second goal came from the boot of substitute Keagan Dolly, who drilled home a beautiful free kick in the 75th minute to put Chiefs ahead.

Another Chiefs substitute, Cole Alexander, scored late in the game to make certain of the points.

There was no letting up in the opening 10 minutes, as both teams were able to get beyond the backline and sent in telling balls, the hosts coming closest to breaking the deadlock early on.

Azola Matrose was able to turn the ball into the Chiefs danger area, where the ball bounced between two Chiefs defenders, with Eva Nga getting between them and connecting with the ball, beating Chiefs keeper Brandon Petersen from close range,.but hitting the upright to give Chiefs a let off.

Chiefs themselves were able to come up with a chance at the other end in the 16th minute, as Bernard Parker won a headed dual on the right against Veluyeke Zulu, finding Khama Billiat, who turned the ball goalwards where Nurković raced ahead of Tebogo Makobela and met the ball, but side footed it wide of goal.

Amakhosi were now in the ascendancy and had another great opportunity three minutes later, with Billiat again teeing up Nurković, who drove the ball powerfully towards goal, to have Loydt Kazaupa at full stretch diving to his right to push the ball away.

Chiefs pressure and dominance would pay dividends in the 23rd minute, with a long searching ball from Petersen finding Parker on the right wing, who did well to bring the ball under control before picking out Billiat. The winger again managed to send in a well- timed ball towards Nurković, who this time fought off his marker, got to the ball before Kazaupa and was able to knock it home for his first goal of the season to put Chiefs 1-0 up.

On 33 minutes Chiefs were denied a second goal as Kazaupa went up to collect an aerial ball, but knocked into teammate Sandile Mthethwa and lost the ball,.

Kearyn Baccus took advantage and played it to Nurković, who slammed the ball home from close range, but the officials wrongly overturned the goal as it was clear that Kazaupa was impeded by his own player.

The half concluded with Siphelele Luthuli blazing the ball wide from close range in the 43rd minute and Matrose sending the ball across the face of goal after working himself some space down the right, as Chiefs led 1-0 at the break.

Almost from the restart the hosts were back level as Eva Nga ran onto a long ball from the right over the top, as the Chiefs defence stopped, waiting for an offside flag but Nga carried on running and knocked the ball along the ground, beating Petersen in a one on one situation to draw the teams level.

Eva Nga looked to have been offside when the ball was initially played to him, but the flag stayed down and the goal stood.

Chiefs thought they were ahead in the 54th minute as Reeve Frosler managed to send another well delivered ball into the danger zone, Ramahlwe Mphahlele lunged at the ball and connected with it in the air. It looked goal bound until Kazaupa threw back his right hand and managed to somehow stop the ball from going past him.

Chiefs had the misfortune of again being denied taking the lead with 20 minutes to go, as Kazapua after receiving treatment came back onto the field and mishandled a corner from the right, which fell to Baccus, whose thumping header hit the crossbar. On the follow up Mphalele’s attempted header at goal was blocked by Roscoe Pietersen.

While he stopped a near-certain goal Pietersen fouled Billiat in a dangerous position a few minutes later, giving Chiefs a free kick in Billiat or Dolly territory.. The duo combined with Dolly playing the ball to Billiat, who then touched it back to Dolly, who curled it around the Chippa wall and despite Kazapua getting his fingertips to the ball, there was no stopping Dolly from getting his 7th league goal of the season.

Chiefs made certain of the game with a third in the 88th minute, when Alexander connected with Njabulo Blom’s layup from the right, knocking the ball home on the turn getting it past Kazapua, who had until that stage kept his team in the game with a number of wonder saves.

Fact of the Game –  This was Chiefs third successive away league win over Chippa United, it is the first time they have won three away league games against Chippa in a row. It was also Chiefs 10th league win in 19 games.

Number of the game 6 –  Stuart Baxter as a Chiefs coach has won all six of his league games against Chippa United.

MVP –Billiat was the man of the match as he made two assists and created a host of chances for Amakhosi, Nurković scored a confidence boosting goal and made life hard for the Chippa defence, while Parker also put in a captain’s performance. Chiefs substitutes Dolly and Alexander proved to be worthy additions to the game.

What next – Chiefs are next in action at home against TS Galaxy on the 5th of April. Kick off is at 19h30.