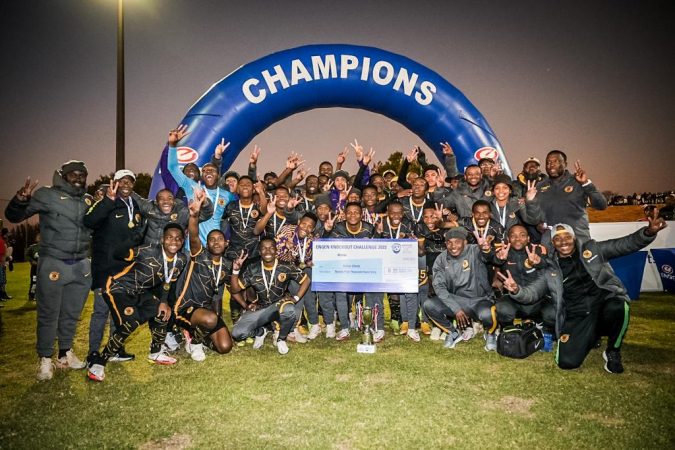 Kaizer Chiefs were on Sunday crowned champions of the Engen U18 Knockout Challenge after beating Mamelodi Sundowns in the final of the Gauteng leg of the three-day tournament.

Chiefs made their intentions clear early on as they won all their three group matches against Randburg AFC, Jomo Cosmos (who were defending champions) and Highlands Park.

Their fine form continued in the quarterfinals when the young Amakhosi knocked Black Aces out of the competition on Saturday afternoon. The semi-finals were played on Sunday morning and the opponents were the School of Excellence. Amakhosi’s goal scoring machine Wandile Duba scored a brace to book a spot in the final.

Chiefs’ opponents in the final were Mamelodi Sundowns, who beat SuperSport United on penalties to book their place in the final.

The game was tough, as both teams were determined to emerge victorious in a tense encounter. Chiefs scored first through Thulani Mabaso, but Sundowns juniors leveled matters. The teams finished the game with the scores tied at 1-1. The game went straight to a penalty shootout, which Amakhosi won 2-1.

Coach Vela Khumalo, who was assisted by Donald Ace Khuse, believes they achieved their objectives, given that the tournament took place a week ahead of the DStv Diski Shield.

“It’s a boost for us to win this tournament. It will help with the game that’s coming up this weekend against SuperSport Reserves,” said coach Khumalo after the game.

There were a number of individual accolades for the young Amakhosi lads at the end of the match. Wandile Duba walked away with the striker of the tournament, as well as top goal scorer awards, after netting five crucial goals in six matches.

Jeremiah Thanyane walked away with the defender of the tournament prize for his excellent work over the three days.

“The standard of the game was quite high, but our standard is a bit higher because our boys are exposed to tough competition as some of them play in the DStv Diski Challenge, even though they are under 18. To show our strength, we didn’t even concede many goals because we were able to deal with the opposition, said Khumalo.

“Look, we had some under-17 players who will now be considered for the Reserve Team. We didn’t even play Mduduzi Shabalala, who still qualifies for the competition, but we let him stay with the senior team,” the Chiefs coach added.

The tournament will now be held in the Western Cape next weekend, followed by KwaZulu-Natal and other provinces.

“It’s a great feeling to win, but what is important for us is the minutes and hours we need for a player to be properly developed,” concluded Khumalo.

Amakhosi will face other provincial winners in the Champ of Champs later in the year for the national title of the Engen Knockout Challenge. The national winner will then go overseas to represent South Africa.