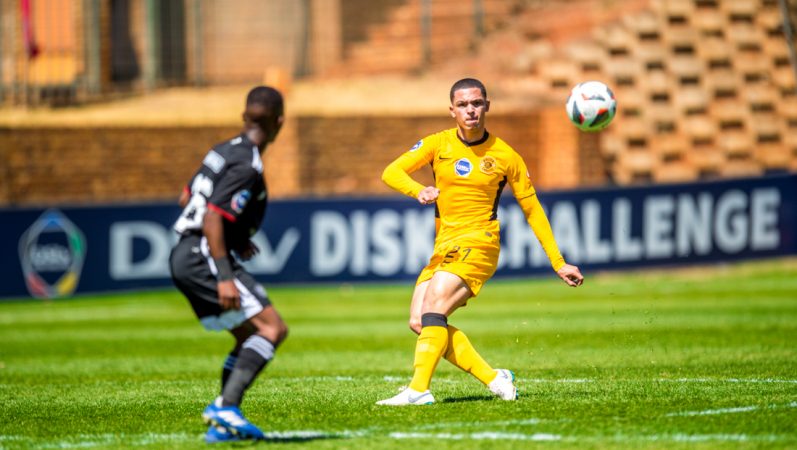 Aden McCarthy spearheaded a dream start to the season for Kaizer Chiefs’ DStv Diski Challenge team when they began their campaign with a convincing Soweto Derby victory, before they hit a bump on the road in Durban against Golden Arrows.

Now, as Amakhosi’s reserve team return to more familiar Joburg surroundings to face Swallows FC at Dobsonville Stadium this week, McCarthy says they need to “pick up their socks” and get back to winning ways.

“In Durban the result did not go our way. We lost 3-1 and only managed to score one goal. Our weaknesses were in the final third, with our final passes and getting the goals. We dominated the game in the first half and the second half, it’s just a pity the victory did not come our way,” the Chiefs defender reflected frankly on the loss against Arrows.

Now, though, he feels they need to put in the work and get their season back on track quickly against the Birds.

“We need to work on our finishing in training and follow the same game plan and do what the coach wants us to do. We need to get early goals as soon as possible, so that we dominate the game,” McCarthy, son of former Chiefs defender Fabian McCarthy, says determinedly.

The young defender was the man of the match in Chiefs’ commanding 3-0 win over Orlando Pirates in their first game of the season and he is looking for the team to put in a dominant display this weekend.

“I believe that we had a good start. It is just a pity that the three points did not come our way this past weekend. I know that the boys will pick up their socks and keep the consistency after the next win. Sooner or later, we will be leading the log,” McCarthy says, oozing confidence.

He has been studying opponents Swallows FC and ahead of the 12h30 kick-off this Saturday he said: “I have watched one of their games. We need to keep possession, dominate the game and tire them out.”

The younger McCarthy has set himself personal targets, which he is aiming to meet.

“This season I have set myself some personal goals as well, to keep clean-sheets and score at least ten goals. It’s a season of 30 games, so my aim is just to keep the partnership strong between me and my fellow center backs and to let in as few goals past us as possible,” concludes McCarthy, who got on the scoresheet against Pirates and is backing himself to be an offensive and defensive threat.

While Chiefs have won one game and lost one, Swallows are winless so far this season, having drawn their first game with TS Galaxy 2-2 and being beaten 3-2 away from home in their last game by Marumo Gallants.

Swallows currently sit in 13th place with a single point, while Chiefs are sixth on the standing. A win would see them climb up the table into the top three spots.