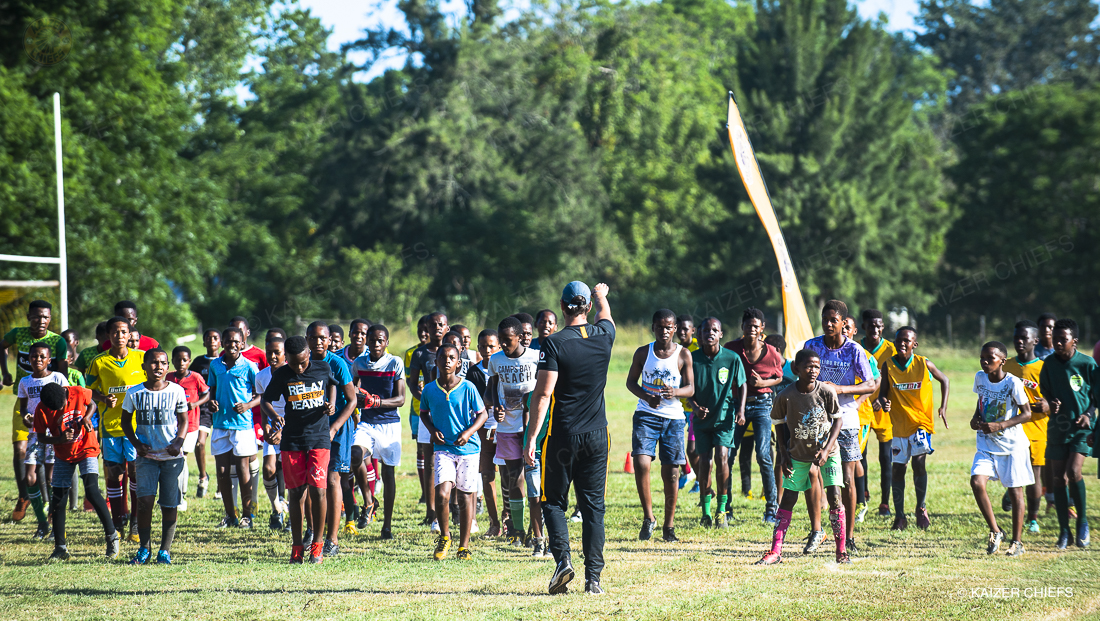 “We are changing the mindset of the people in Addo, we give them hope. Just seeing that Kaizer Chiefs are here, has such an impact,” reflects the club’s Head of Scouting, Walter Steenbok on last week’s seven-day San Miguel and Kaizer Chiefs Soccer Community Project.

A four-day soccer clinic started on Monday morning, 2 March. Four teams trained in the morning, while four others had a run in the afternoon.

The clinics were run by Steenbok, assisted by Donald ‘Ace’ Khuse and fitness coach, Jamie Schultz.

CSI activations were held at the Moses Mabida High School (Kirkwood) and the Samkelwe High School (Addo) on Friday morning, 6 March. Amakhosi donated full playing kits to both schools to encourage participation in football for the learners.

Khuse spoke at the school in Kirkwood, while former Glamour Boy, Patrick Mayo gave a motivational talk to the pupils in Addo.

“It was wonderful to see how the kids listened,” Mayo reflected. “You could see that they are very eager to learn, which will help them to succeed in life, independent of what they want to do.”

The football tournament was held on Saturday. The exciting final resulted in a 1-0 win of Sun Orange over Addo Research. The winner was scored by goalkeeper Lubalalo Tau from a free-kick in the first half.

“This is like a dream come true,” reflected the 20-year-old, before talking about his habit of taking the free-kicks. “I started working on taking free-kicks a few years back. I just love to take them.”

It was for the second time that Kaizer Chiefs and San Miguel that this weeklong community project took place.

San Miguel South Africa has been running a soccer community project, for their employees, ahead of the annual picking season since 2012.

The multinational citrus company is based in Addo. With headquarters in Argentina, they are leaders in the production, distribution and sale of fresh fruit and food products derived from citrus in the South Hemisphere.

“The impact this project has on the community is fantastic,” comments San Miguel’s Marketing, Communication and CSR officer, Armand van der Merwe.

“Compared to last year, we now added trials for the Under-15s and included the visits to the two schools, which was about motivating the kids to follow their dreams.

“The San Miguel and Kaizer Chiefs Soccer Community Project is not only about soccer, it’s also a medium to talk with the youngsters about, for example, life skills.

“To have coaches, the KCTV crew, a photographer… everybody felt important, it gives motivation and confidence.”

Chiefs’ Head of Scouting, Steenbok, is as enthusiastic: “The clinics started from mass development (clinics) to talent identification (trials). The school visits were very encouraging. The tournament matches were very competitive, but at the same time peaceful.

“Our whole involvement in this community project shows that Kaizer Chiefs are a caring club.”