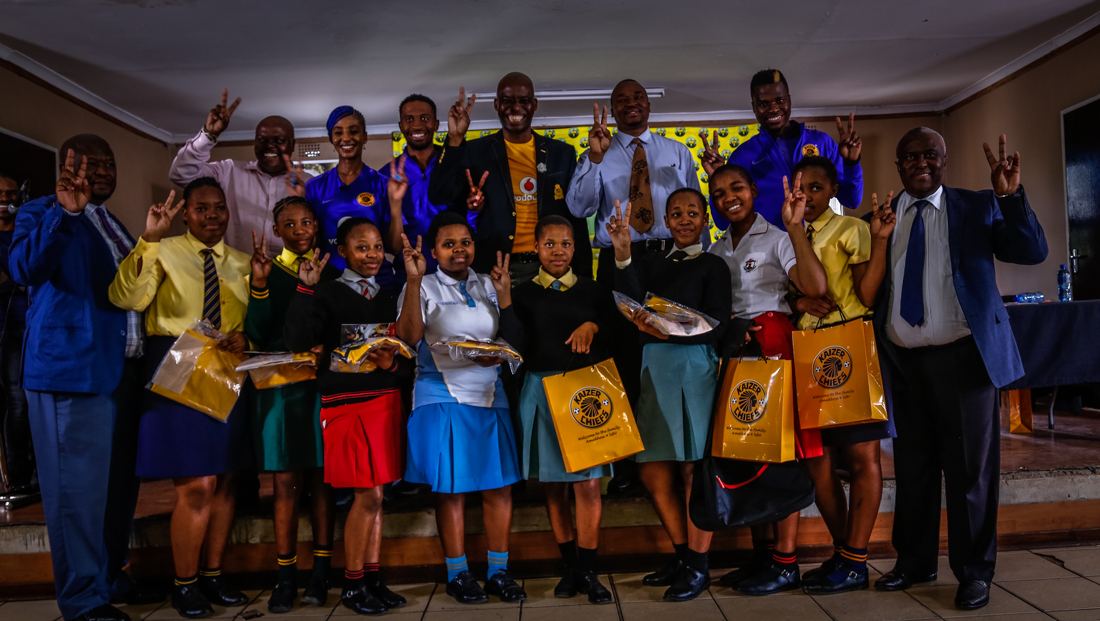 Ahead of Kaizer Chiefs’ first official match of the new season against SuperSport United in the MTN8, Amakhosi’s CSI team took the opportunity to revisit the Mthwalume district in the KwaZulu-Natal’s South Coast to make good on a promise to honour the region’s top school performers for their hard work in the mid-year examinations.

As a follow-up to Kaizer Chiefs’ initial visit in February 2017, where school learners received lessons about safe online behaviour and cyber bullying, the club returned to the area to reward the 10 top learners in this year’s June examinations. Joined by the Umzumbe Municipality, the department of Education and the Vodacom Foundation, the club contributed authentic merchandise, Vodafone tablets, Vodacom airtime and a laptop.

“Corporate social responsibility programmes are a key part of what our club stands for,” said Kemiso Motaung, Kaizer Chiefs’ Digital Manager. “It is always heart-warming to see the happy faces of the kids who benefit from our initiatives. What is most encouraging is that the learners had to work hard for the prizes and we hope this will motivate others to work hard. We are here to demonstrate to them that hard work pays off in the hope that they will carry this mantra throughout their lives.”

“What the Kaizer Chiefs team did today is beyond special,” said Cele. “We hope they do not tire from their great work of inspiring the learners in areas such as ours. May other clubs also learn to teach supporters about the importance of education. We are truly grateful for what Chiefs did and we implore them to return and do more work with us so we can produce better leaders of tomorrow. “

The top three learners were Nothando Mkhize from BonguCele, who is in Grade 9 and a top performer in Mathematics and Natural Science. Second place was taken by Nonhlakanipho Gumede from Sithokozile High, who also walked away with a Vodafone tablet and a new Kaizer Chiefs home jersey, plus other prizes. Zibonele High School’s Nompilo Dlamini, whose aspiration is to study medicine next year after completing grade 12, walked away with the coveted prize of a laptop, airtime and other Kaizer Chiefs sponsored prizes.

Also in attendance were Kaizer Chiefs players, William Twala and Edmore Chirambadare, whose inspirational messages to the audience drew loud applause from the star-struck learners.

The mayor of the Umzumbe Municipality, Sizwe Ngcobo, reiterated the sentiments of appreciation to Kaizer Chiefs and Vodacom for fulfilling their pledge to return to the area. He said the prizes will help the winners prepare for the final year examinations and he believes the gesture goes a long way in changing the lives of the young learners.

Kaizer Chiefs and Vodacom will identify other areas where they will extend the programmes including the e-schools programme that the Vodacom Foundation has been championing for the past few years.