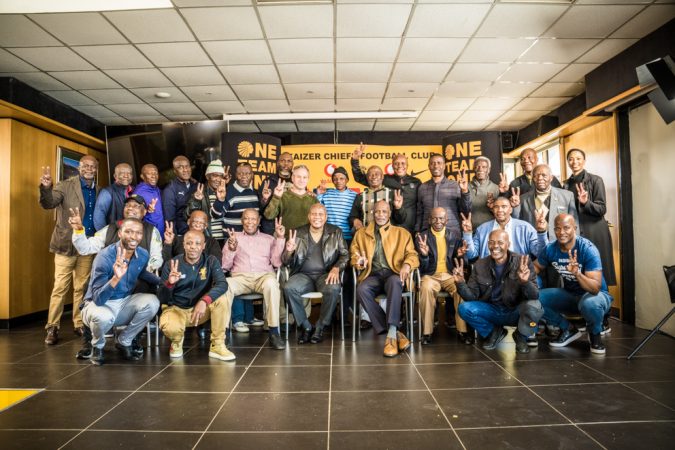 An assembled class of Amakhosi royalty gathered at the Kaizer Chiefs village on Thursday afternoon as the  Club played host to a number of its alumni who represented the Amakhosi from inception in the 1970’s, 1980’s, 1990’s and early 2000’s.

A beaming Kaizer Chiefs Chairman, Kaizer Motaung, was taken aback by the calibre of Club legends who had gathered at Naturena, as many as 35 of them which included Club luminaries such as Absalom ‘Scara’ Thindwa, Nelson ‘Teenage’ Dladla, Jan ‘Malombo’ Lechaba, Marks ‘Go-Man-Go’ Maponyane and Doctor ‘16’ Khumalo.

The legends had come together to discuss topics such as arrangements for the funeral of former Chiefs player Jerry Sadike, who passed away last week and will be laid to rest on Friday, as well the Club’s visit to KwaZulu-Natal at the end of August for an event to honour former Club director and stalwart, Mr China Ngema, in his hometown of Nongoma.

“I need to shake everyone’s hands, because I can’t believe who has come here today. These players were part of an important part of our history from the start. We value their contributions and want to keep getting them together as often as we can. We want to utilize them to help grow the current first team and our youth players,” said the Kaizer Chiefs Chairman.

The Club has embarked on a process of embracing its legacy and the Club’s Marketing Director, Jessica Motaung, said Chiefs’ former players played a huge role in helping the Club value and appreciate its history and contribution to South African society.

“Our history in a variety of ways is important to the Club’s legacy. Engaging with our legends and conducting various projects with them is part of this very crucial part of our heritage as a family, not just a football Club,” said Motaung.

“We are working on a programme with our legends which is all-engaging and encompassing. We have been working with some foreign clubs in this regard and have been sharing ideas with them. We have an idea of how we want to do that and an exciting road ahead with our legends,” added Motaung.

Speaking on behalf of Chiefs players of the 1970’s, Lucky Stylianou, a history maker when he joined Chiefs in 1978 as one of the first white players to play for the Club, said: “The legends and past players are an important part of the journey of this Club and are role models. They play a vital role in the community and it is important that everyone has gotten together today. The change that came about socially in the 1970’s, 1980’s and 1990’s is through the leadership of people like the Chairman Kaizer Motaung.”

Former Chiefs striker Maponyane said he was very happy to be part of a process whereby the club engages more with its former players.

“Legends can help the current crop of players realise how important the team is. When you talk to them about how things used to be and if they don’t hear from those who played for the Club, they think you are talking about people that don’t exist. This is an important moment and it is vital that we meet at moments like this and share memories and be jolly,” said Maponyane in his usual bubbly fashion.

The great Jan Malombo Lechaba also shared his thoughts, saying “I hope and trust that this is not the last time that we meet. We would like to be part of the team’s journey ahead and motivate the players to win games.”

The last word was left to former Chiefs goalkeeper, Brian ‘Spiderman’ Baloyi, who spoke on behalf of the latter generation of Chiefs players saying, “there is a lot we want to contribute to this Club. We love Kaizer Chiefs. Some of us played a long time at this Club and we want to be part of the Club. We cherish this moment of being amongst such legendary players”.