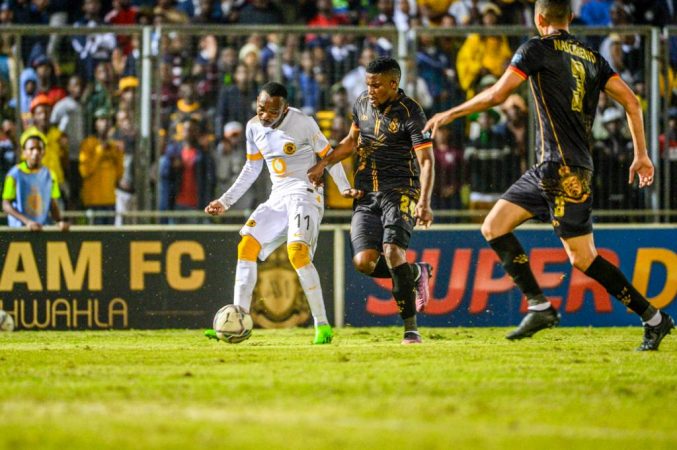 Kaizer Chiefs began their 2022/23 DStv Premiership campaign with a narrow defeat to Royal AM at the Chatsworth Stadium just south of Durban on Saturday afternoon, although there were enough signs to suggest that brighter days lie ahead for Coach Arthur Zwane and his new-look Amakhosi outfit.

Chiefs were stunned when Ricardo Nascimento gave Royal AM the lead, catching the visitors cold with barely a minute gone. It was a typical start for a first game of the season, with great energy and intent, yet a few imprecise touches here and there as the players get into the swing of competitive football again. However, the Glamour Boys spent virtually the remainder of the match pushing for an equaliser, repeatedly applying pressure to the opposition rear-guard. While Chiefs were not at their fluid best, considering it was the first time this line-up played a competitive match, it gave an indication that when the new additions fully integrate into the team as the season unfolds, a clinical edge will emerge that will see much of the skilful build-up play converted into goals, and points.

Fitness issues and suspension denied Coach Arthur Zwane beginning his first full season in charge of the team, of the services of Sfiso Hlanti, Kamohelo Mahlatsi, Sibusiso Mabiliso and Phathutshezo Nange and he chose to start with four of the Club’s new signings, giving Black & Gold debuts to Yusuf Maart, Siyethemba Sithebe and Ashley Du Preez, as well as welcoming back Zitha Kwinika after a seven-year absence.

Amakhosi began the match on the front foot, with Keegan Dolly, wearing the captain’s armband prominent in probing for weaknesses in the opposition defence.

Royal continued to absorb pressure as Chiefs went in search of a deserved equaliser. They almost levelled in the 21st minute when Royal AM ‘keeper Nyame fumbled the ball but was bailed out by Nascimento’s clearance off the line to barely preserve the home side’s lead. Four minutes later Billiat struck a free kick into the wall, and Nyame was called into action again a minute later as Amakhosi maintained pressure. Then, De Jong had a couple of half chances that the Chiefs defence dealt with comfortably.

As the rain began to fall in Chatsworth, Chiefs continued to attack but were frustrated by a resolute Royal defence and, 10 minutes from half-time might have fallen further behind had Lingwate not wasted a gilt-edged chance after being set up by Potsane.

Right on the stroke of half-time, Nyame came to Royal’s rescue again, holding on bravely after great work by Billiat to threaten the hosts’ goal.

Chiefs went onto the break trailing but with enough positive signs to be confident of overturning the deficit after the break.

The second period picked up much as the first ended, with Chiefs on the front foot. Clear chances came at a premium as both midfields frantically battled for the ball in slippery conditions. Sithebe had a half-chance in the 67th minute, turning sharply to get his shot off but without troubling Nyame. De Jong made the odd burst for Royal but what little danger came Bruce Bvuma’s way was expertly dealt with by the ‘keeper, as he demonstrated by brilliantly saving Nascimento’s shot from close range.

With 17 minutes to go, Ngcobo almost restored parity but his shot found the side netting to the disappointment of the Chiefs faithful in the stands. Nine minutes later Ashley Du Preez broke away and was clattered by Nascimento, who was the last defender. However, the referee deemed it fair contact otherwise Royal might well have gone down to 10 men.

Amakhosi continued to bash at the door but again, with a couple of minutes left on the clock, Nyame again denied Zwane’s team what would have been a deserved share of the spoils at the very least when he kept out Dolly’s free kick.

In the end, it was not to be and after four minutes of added time the referee blew the final whistle.

Despite the adverse result, Zwane can take a number of positives from the game which, notwithstanding the score, they dominated virtually from start to finish and can look forward to an improved showing when they entertain Maritzburg United in their opening home fixture of the season on Tuesday evening at FNB stadium, kick off at 19h30.