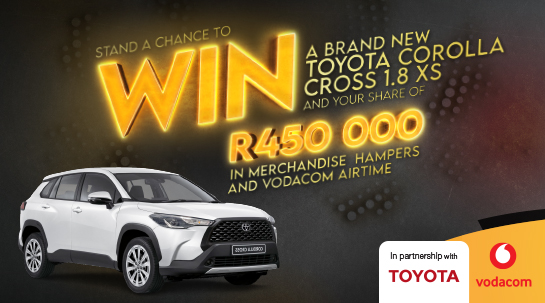 The competition will run from 30 September 2022 until the end of the current season on 30 June 2023. In addition to the main prize, subscribers and supporters stand a chance of winning other fantastic prizes during the campaign.

To enter, supporters need to get a KC Mobile starter pack from the nearest Vodacom shop, KC Mobile partner retailer or at any of our roadshows and recharge it for R29 or more monthly to stand a chance to win.

All subscribers with valid entries will be in line to win the monthly prizes, which include a KC hamper worth R2500, or an unforgettable Vodacom RingaNathi experience with one of the Kaizer Chiefs players on a monthly basis.

“We are very excited about the campaign because we always want to reward Kaizer Chiefs supporters,” says Marketing and Commercial Director, Jessica Motaung. “With this amazing competition, KC Mobile subscribers have additional reasons to keep their KC Mobile sim cards in their phones. They receive great value for money from the data and airtime rewards, as well as having an opportunity to win a brand-new car, just by using the sim card.”

Motaung also thanks sponsors, Toyota, for coming on board by giving supporters a chance to win a new vehicle. “It’s always great to be able to partner with some of our sponsors and bring value to our supporters,” adds Motaung.

The KC Mobile starter pack is powered by leading mobile network operator and Kaizer Chiefs’ partner, Vodacom. The starter pack offers subscribers exclusive airtime and data rewards, including 100% bonus airtime back for every recharge they make on the sim card.

“We encourage current subscribers to make sure they recharge with as little as R29 for the next nine months, and those who do not have the starter pack yet, to get one so they can become eligible to win monthly prizes and ultimately, the possibility of a brand new Toyota vehicle worth hundreds of thousands or Rands,” concludes Motaung.

Winners will be announced monthly across Kaizer Chiefs social media platforms and the Toyota Corolla Cross winner will be drawn in June 2023.