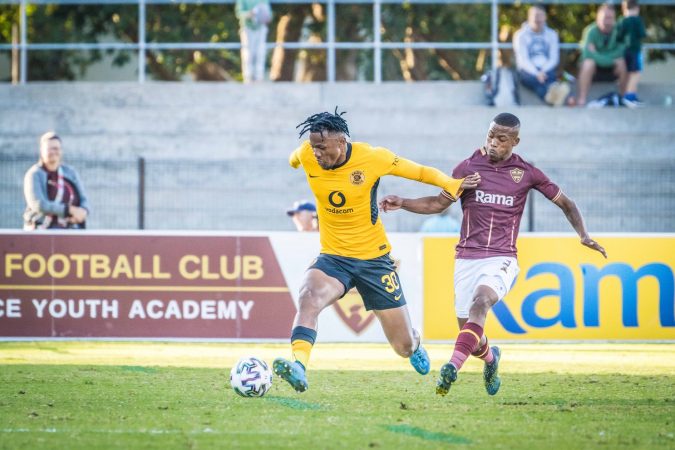 Kaizer Chiefs fell to back to back DStv Premiership defeats as they were narrowly defeated 1-0 at the Danie Craven Stadium in Stellenbosch on Saturday by hosts Stellenbosch FC.

The only goal of the game came in the 20th minute with Dino van Rooyen’s strike separating the two teams. The result was harsh on Chiefs, who dominated large parts of the game but were unable to turn their dominance into goals.

Early on Njabulo Ngcobo met Keagan Dolly’s in-swinging corner from the right with his head, getting to the ball inside a crowded Stellenbosch 18 yard area, but his effort lacked direction and sailed beyond the Stellenbosch goal.

Very much against the run of play Stellenbosch went ahead as a Chiefs throw-in on the right was intercepted by Jayden Adams, his touch found Athenkosi Mcaba who was able to set Judas Mosamedi free.

Moseamedi ran towards the Chiefs goal before laying the ball off to van Rooyen, who had raced from deep in his own half to reach Moseamedi, once inside the Chiefs 18 yard area he struck the ball across goal. It hit Chiefs keeper Brandon Petersen and went under his body past him and across the line, giving the hosts the advantage in the 20th minute.

Five minutes later the hosts were on the attack and again building up from deep inside their own half they were able to carve out an opportunity. An attempted headed clearance by Happy Mashiane was picked up by Stellenbosch with the ball eventually finding Moseamedi, who set up Ashley Du Preez and with just Petersen to beat he managed from a tight angle to get the ball past the Chiefs keeper. His effort, however, did not hit the target and went just wide of the Chiefs keeper’s right hand upright.

Into the second half and six minutes after the restart a Chiefs attack broke down and Moseamedi was sent through on goal. He was able to get clear of Ngcobo and drove the ball powerfully towards goal. This time out Petersen managed to close down the angles and was able to make a crucial block of the ball.

The introduction of Dumsani Zuma for Chiefs just past the hour mark seemed to spark life into Chiefs going forward, in the 79th minute he came close to an equalizer just missing the target after connecting with a ball from the right by Kgaogelo Sekgota.

It was the industrious Zuma whose cross from the right deep into referees optional time at the end of the game caused panic in the hosts’ penalty box. Eventually, the ball reached Khama Billiat who rolled it towards Nkosingiphile Ngcobo who drove the ball from distance towards goal, but Sage Stephens moved to his left to pluck the ball out of the air and make a save.

Chiefs can feel aggrieved not to have returned from the Western Cape with three points. Amakhosi will now turn their focus and attention to their next DStv Premiership assignment against Golden Arrows on the 27th April.