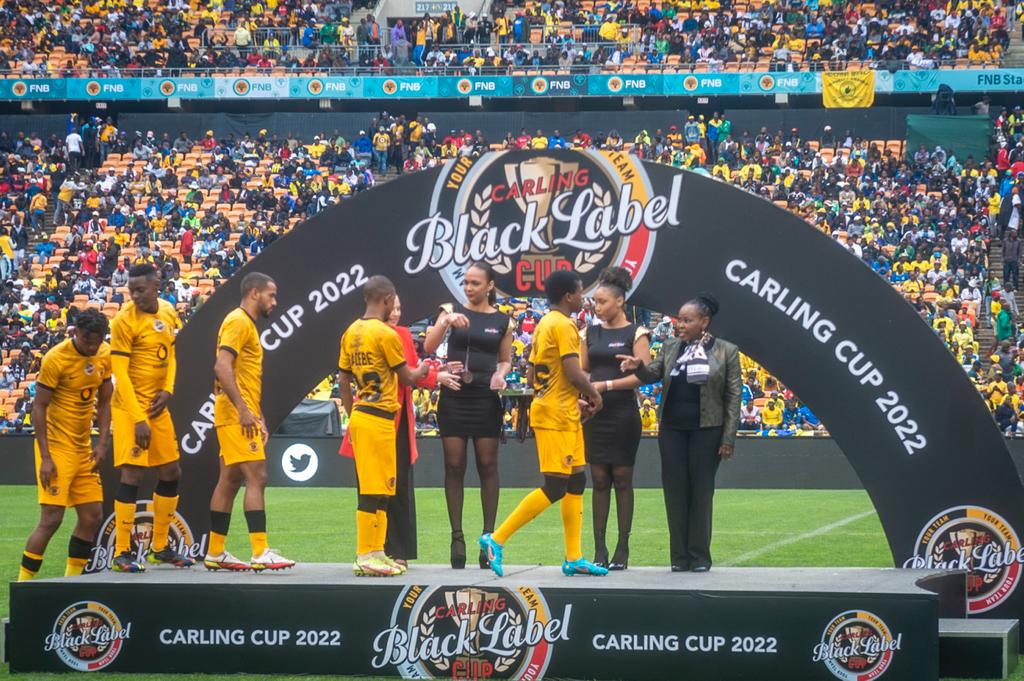 Kaizer Chiefs finished in third position in the 2022 Carling Black Label Cup after beating AmaZulu 4-2 in the third and fourth place penalty shootout.

This was after Chiefs were controversially eliminated from the competition at FNB stadium on Saturday after earlier in the day being edged out 6-5 on penalties by perennial rivals, Orlando Pirates.

The Soweto Derby ended goalless after 90 minutes in a hard-fought semi-final.

It was extremely cruel on Amakhosi, who had created the better chances throughout the match and had what seemed to be a perfectly good goal disallowed near the end, when the referee’s assistant incorrectly flagged Ashley Du Preez offside after the striker had put the ball into the Sea Robbers’ net.

With Chiefs scoring all five of their regular penalties in the resultant shootout, the unfortunate S’fiso Hlanti put his spot-kick over the bar in the first round of sudden death, before Vincent Pule consigned Amakhosi to another penalty shootout for third place - against AmaZulu, who were defeated by Mamelodi Sundowns in the earlier semi-final.

The inclement weather conditions, plus the unique selection criteria – which saw both coaches fielding teams they would probably not choose to put out – made slick, free-flowing football difficult, as both teams attempted to gain a foothold on the slippery surface.

Amakhosi forged the earliest half-chance in the sixth minute when Mulomowandau Mathoho headed over the bar from S’fiso Hlanti’s cross from the left.

Kgaogelo Sekgota was Amakhosi’s main threat, making some probing forays down the left flank and causing the Buccaneers defence some concern, but it was a defender who came closest to opening the scoring nine minutes before half-time, with the woodwork coming to Pirates’ rescue. Keagan Dolly floated a corner into the danger area, which eluded the flailing grasp of ‘keeper, Siyabonga Mpontshane, but not Njabulo Ngcobo, whose header struck the frame of the goal.

Sekgota was put clean through by Khama Billiat a few minutes later and only a last-ditch tackle from Shandu prevented the flying winger from giving Chiefs the lead.

As the half closed, it was Chiefs in the ascendency, with Nkosingiphile Ngcobo flashing a shot wide of the post from the edge of the area.

Both coaches made a raft of substitutions in the second half, but the pouring rain hampered the efforts of the players to provide a spectacle for the sizeable 72 000 crowd which, to their credit, refused to let the weather dampen their spirits as they sang and danced in the stands.

However, 12 minutes from full-time, Khama Billiat played a delightful ball over the top for Du Preez to run onto and the striker took it down expertly before knocking it past Mpontshane into the net. The referee’s assistant immediately raised his flag, but TV replays clearly indicated that Du Preez had timed his run to perfection and the goal ought to have stood.

With the match ending 0-0, it was left to the lottery of penalties to determine who went through to the final and, on this occasion, Lady Luck deserted Amakhosi, who did not deserve to lose, having been the more threatening of the two teams throughout the game. For the second time in a fortnight, Pirates failed to land a proverbial hand on Amakhosi again, never really looking like breaching the Chiefs defence.

On another positive note, the performances of youngsters, Samkelo Zwane and Mduduzi Shabalala will have pleased the Coach. The pair of teenagers exhibited maturity beyond their years in the heat of a Soweto Derby, which bodes well for the future of the Mighty Glamour Boys.